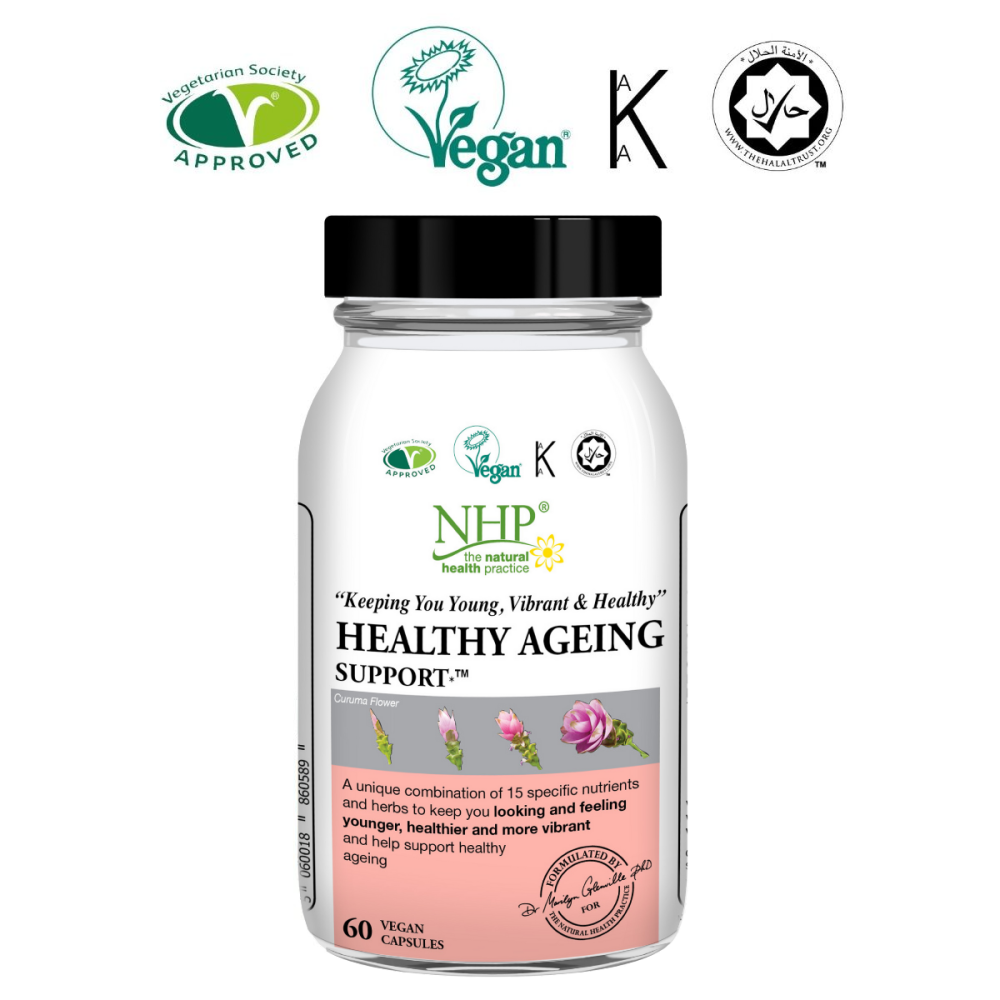 This special combination of 15 carefully chosen nutrients and herbs has been formulated by the UK’s leading nutritionist Dr Marilyn Glenville PhD. NHP brings to the market a brand-new formulation specifically designed for those wanting to improve their healthspan as well as their lifespan and stay healthy for as long as possible.

Nicotinamide riboside chloride (NR) - a specific form of vitamin B3, converted in your body to nicotinamide adenine dinucleotide (NAD+). It repairs damaged DNA and low levels of NAD+ have been linked to ageing and chronic illnesses such as type 2 diabetes, heart disease and Alzheimer’s.

Resveratrol - an antioxidant produced by plants in response to injury or under attack from bacteria or fungi. Resveratrol is a natural polyphenol with many researched benefits including anti-inflammatory, cardioprotective and neuroprotective. Found in the skin of grapes and came to attention from the ‘French Paradox’ where it was thought that wine, especially red wine where the skins are included, was protecting the French from heart problems. But it now seems that the protection is not from the alcohol in the wine but the actual grapes from which the wine is made. Grapes contain resveratrol which has been shown in studies to reduce cholesterol levels.

Quercetin - an antioxidant flavonoid which is beneficial in slowing down ageing, particularly skin ageing. It plays a key role in reducing damage to cells from free radicals. It also helps to improve NAD+ levels and helps to control persistent inflammation, known as ‘inflammageing’ which is thought to be one of the drivers of ageing.

N-acetyl cysteine (NAC) - an amino acid that acts as an antioxidant and has anti-ageing properties. It improves detoxification of harmful substances and also helps to remove heavy metals like mercury.

Alpha lipoic acid - an antioxidant that is effective against most types of free radicals. Helps to balance blood sugar and inhibits glycation. Glycation creates a damaged, encrusted structure in different parts of the body including the skin. Membranes become thickened, losing their elasticity which stops them function normally.

Curcumin - a powerful antioxidant from the spice turmeric which has anti-inflammatory properties. Research has suggested that it could slow down ageing.

Glutathione (reduced) - a powerful antioxidant which declines as we get older. It protects cells from free radical damage and supports liver detoxification so helps to prevent a build-up of toxins.

Green tea extract - contains a powerful antioxidant called EGCG (epigallocatechin gallate) that has the potential to slow down ageing. It has anti-inflammatory properties and has been shown to reduce the risk of type 2 diabetes, lower blood pressure and decrease risk of cognitive decline.

Fisetin - an antioxidant found in different fruits and vegetables which was first known about in a plant called smoke tree. It is not only a powerful antioxidant, but research is showing that it has remarkable properties in terms of influencing the fundamental mechanisms of ageing.

Co-enzyme Q10 - for the normal release of energy and also acts as an antioxidant. Your body should produce Q10 but it declines with age, illness and statins.

Vitamin D3 - helps to control inflammation and higher vitamin D levels associated with longer telomere length. Telomeres as the protective bits of DNA at the ends of your chromosomes and telomere length is a predictor of age-related diseases.

Vitamin K2 - known as a protective super-micronutrient in ageing and ‘inflammageing’. It can protect cells from damage due to free radicals and has been shown to reduce the risk of cardiovascular disease by preventing calcium deposits forming in the walls of blood vessels and improving bone mineral density so reducing the risk of osteoporosis.

Mixed tocotrienols - have anti-inflammatory benefits and have been shown to affect biomarkers of ageing.

For best results take 1 capsule twice a day with food